When I discovered this client in June of 2017, they had just experienced a precipitous six month decline in Google keyword traffic to their site as you can see in the graph above. Their keyword traffic had dropped to 20 visitors per month from nearly 5K per month just six months earlier! The effect on their overall website traffic was to cut it in half. This was a bad situation!

Unaware of what was going on, they had already started to compensate for the decline in sales with increased ad spending. By quickly diagnosing the problem, I was able to get them on their way again and save them a lot of money, traffic, and lost sales.

However, as you can also see in the graph above, they were not able to fully recover from the damage of ignoring their website traffic and  sustained a loss of about 30% of their overall traffic. When I later looked at competitor traffic over this same time period, it was clear that some of their competition had a happy windfall of free traffic in 2017 – traffic that this company will now have to fight to get back.

As we continued to look at the website data, it became apparent there were deeper issues. For example website traffic had more than doubled in 2016 over 2015 (only to lose a significant portion again in 2017); however, their sales had actually declined slightly over the same period. This clearly showed that they had a conversion problem. They were not converting their increased traffic into sales and were completely losing out on the opportunity that was presenting itself.

Some of the presenting issues were:

A major problem for this company was their severely outdated website design. It had design and layout problems and was not “mobile friendly” – meaning it was not designed to work on mobile phones or tablets. This was a significant issue in that half of their existing traffic was coming in on mobile devices!

As you can see, the site did not present their products well and was a nightmare to navigate on mobile devices. 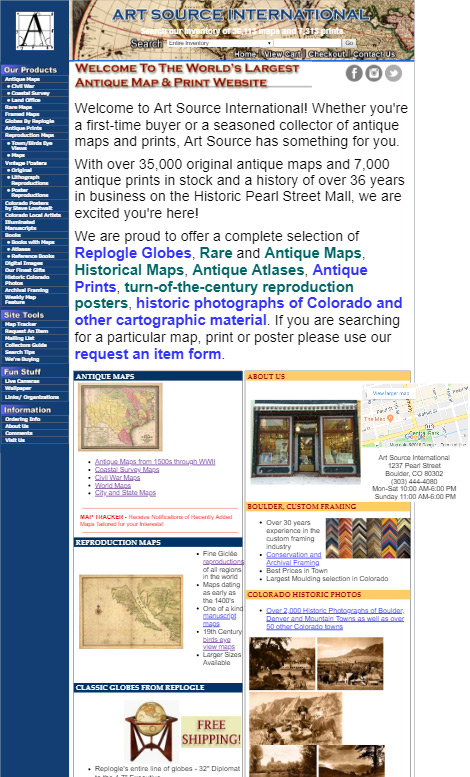 The only reason this business had made it as far as they did with their existing website was that they had a large volume of strong content within their market niche. However, they were fighting against their own success by failing to update their site for so many years.

In addition to their other issues, the company was suffering from a diluted brand. With the website URL rare-maps.com they were competing against another website in their niche: raremaps.com. By using a URL so close to their competitor, they were failing to differentiate themselves and to build their brand identity.

When I first started working with this client, they had trouble getting emails through to me. This was because their site had been hacked more than once and had been added to blacklists as a result. So a lot of their outgoing email was automatically marked as spam.

Their outdated website design was also causing other significant security issues. Their problems with hacking had significantly damaged their online sales over a period of years.